Back to all Headlines 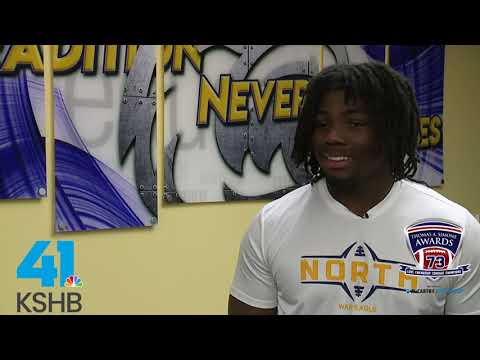 Liberty North’s Melvin Laster was named the winner of the Buck Buchanan Award given to the best large  school offensive/defensive lineman or linebacker.

The sophomore linebacker was announced as the winner on KSHB 41 during the 6 p.m. Newscast. The Buchanan Award is one of the five major awards given out by the Simone Awards presented by The McCarthy Auto Group.

"I never thought I'd be in this position today” Laster said. “I've been working for it my whole life basically, since second grade. I've always had this dream and stuff, so it feels great."

Laster helped lead the Eagles to their first every football state championship game. Liberty North fell to CBC in the Missouri Class 6 title game but it was the first football team in the 115-year history of the Liberty School District to make a championship game.

This past season he was named the Suburban Gold Defensive Player of the Year after being all-Conference as a freshman. Laster finished with 78 solo tackles with 7.5 sacks, 12.5 tackles for loss, two interceptions and a fumble recovery for a touchdown.